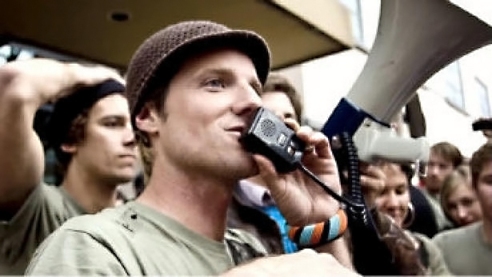 I am pretty sure we all have heard the news of Jason Russell and his scandalous behavior the other day.
But if you haven’t – here is some information for you:

A co-founder of Invisible Children was hospitalized in San Diego Thursday night after people called police to report he was running through the street in his underwear, screaming and pounding his fists on the sidewalk.

I posted a status and Facebook post with a link to the news story.
I may or may not have ‘cast a stone’ in my mind unintentionally.

I think there is a lesson to be learned here with this whole Invisible Children mission.
Well with two of the names involved anyway.

We are just as rotten and sinful as Joseph Kony.
We commit hate daily on the highways of our towns (murder according to Christ).
We lust after women and men (adultery).
We (unintentionally and sometimes very intentionally) mislead people.

We are just as prone to those ‘big sins’ as Jason Russell – we are a moment away.
We are all just a few seconds away from a big slip.
Just a single act of disobedience away from something of this nature.

So maybe before we start accusing Jason Russell of being a terrible leader,
we should examine ourselves – and thank God that, perhaps, our sins are not as ‘public’ as his.

Not out of anything prideful – or boastful – but out of a heart of thankfulness and brokenness.
What if your sin was on the 7 o’clock news?
Yeah – you wouldn’t like it either.

Our hope is in Christ – we will all be judged equally.
Our judgement will be based on our response to Christ.
Nothing more – nothing less.

We are all in the same boat.
Think about it.